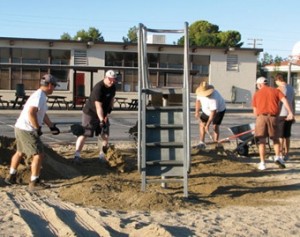 Members of Council 3199 in Ridgecrest, CA

“At a time when many in our communities continue to experience economic
hardship, the increasing charitable work of the Knights of Columbus is a
testament to the power of love of neighbor and to the great things that can be
done by those committed to the common good,” he said June 11.

Anderson presented the results to the Knights of Columbus board of directors
and state leaders in their June 6-10 meeting at the organization’s international
headquarters.

Charitable contributions in 2011 exceeded 2010 figures by over $3.4 million,
while knights worked 3,716 more volunteer hours in 2011 than the previous
year.

Large donations in 2011 included $7.5 million in support of priestly and
religious vocations, $3.6 million for the Special Olympics, and $515,000 for the
Knights of Columbus program Coats for Kids. The donations included continued
support for a program with Project Medishare that provides prosthetic limbs to
Haitian children who were injured during the January 2010 earthquake.

Over the past decade, the organization has donated $1.4 billion to charity
and worked over 653 million volunteer hours in support of charitable
initiatives.

Since parish priest Fr. Michael J. McGivney founded the Knights of Columbus
in New Haven, Conn. in 1882, the organization has grown into the world’s largest
lay Catholic organization. It has over 1.8 million members in North and Central
America, the Philippines, the Caribbean and Poland.

This entry was posted in Knights News. Bookmark the permalink.
7ads6x98y