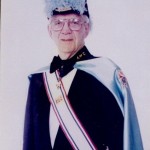 Emil E. Ogden was born September 15, 1927. His father left the family while he was still quite young. He learned to play a trumpet and would earn money for his family by playing in dance bands on the weekends. Emil was in the Army Air Corps and flew with the “Brass Hat” Squadron during World War II. In 1947 Emil married Clementine Lindemann, and together they would have six children.

Emil was a member of the Texas A&M Class of 1953. He played minor league professional baseball from 1949 to 1953 first with the Brooklyn Dodgers and later in the Baltimore Orioles organizations. In 1953 he returned to Abilene, Texas and entered the oil and gas business in order to take care of his growing family. His oil and gas business brought him to College Station in 1979. Today he is the General Partner of Ogden-Chaparral.

Emil joined the Knights of Columbus in March 1949 while living in Abilene, TX. He served the order as Grand Knight, District Deputy and in a number of appointed state council positions. He was elected Texas State Deputy in 1979. He served as State Deputy until 1981. In 1991 he was appointed Vice Supreme Master for the Our Lady of Guadalupe Province by the Supreme Knight, Virgil C. Dechant. Emil served as Vice Supreme Master until 1995.

Emil is a member of the Col. Walter Parsons Council 3205 in College Station, and a member of the Msgr. Valenta Assembly 2041 also in College Station. He is a Knight with Grand Cross of the Equestrian Order of the Holy Sepulcher of Jerusalem. He was awarded Holy Trinity Medal of Honor by Bishop Thomas Gorman of Dallas in 1959. Emil is a member of VFW Post 4692 and American Legion Post 159. He has served his community as a member of the Board of Directors for the Boys and Girls Club, Past President of the Brazos Valley Symphony Society, and Past Chairman of the Arrow Moon District, Boy Scouts of America. Emil was appointed by then Governor George W. Bush to serve on the Texas Workers’ Compensation Insurance Facility Committee. He is a former board member of the Texas A&M University Health Science Center Foundation, and the Scott & White Hospital Foundation Board of Visitors. Emil is a Director’s Circle member for the George H. W. Bush Presidential Library in College Station.

Emil holds two licenses, one as an instrument rated pilot and the other as a Criminal
Investigation Deputy with the Sheriff’s Office of Brazos County.