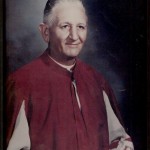 Right Rev. Msgr. Timothy J. Valenta, affectionately known as Father Tim, was born and received his elementary education in Corn Hill, Texas. He received his Seminary education at St. Mary’s Seminary in LaPorte, Texas. Father Tim was ordained on May 7, 1933 by the late Bishop Christopher Byrne. Shortly after his ordination, Father Tim was named assistant pastor of St. Joseph’s Parish in Bryan, Texas. He served as an assistant to Msgr. Gleissner until 1953 when Msgr. Gleissner died. At that time, Father Tim was named Pastor of St. Joseph’s of Bryan and he held this position until his death on September 19, 1977. He was buried on September 22, 1977.

Father Tim was a member of the 3rd and 4th Degree K of C. He was Faithful Friar of the 4th Degree several terms and Chaplain of the 3rd Degree since 1966. He was also a member of the K.J.T. and served as their Chaplain in his parish as well as being their State Chaplain for four years in the early 1970’s. He was a Diocesan Counsultor and Dean of the Bryan Deanery for over 15 years. He also was elected to the Priest’s Senate of the Austin Diocese for several one year terms. Father Tim was a simple, humble, dedicated, deeply religious and hard working priest. Quite appropriately he was described as a “priest’s priest”. For these and many other reasons, we have honored our assembly with his name.