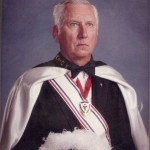 Sir Knight Lawrence Holecek, better known to his friends and former students at A&M Consolidated as “Coach”, was well known in the teaching and coaching circles in Texas. Lawrence was born August 30, 1936 in Rosenberg, TX. He moved to College Station to attend Texas A&M College in 1957 where he received a BS degree in Physical Education. He later received a Masters of Education Degree from Texas A&M College in 1961.

Lawrence Holecek worked for 33 years as a teacher and coach in the College Station Independent School District. A principal that worked with him for several years at CS Middle School said, “Coach was a husband & father first, a teacher second and a coach third. He called all the boys “Son” and it wasn’t because he didn’t know their name; although, love was the bottom line on everything he did.”

Coach was strict but fair and he knew the game of football and basketball as well, if not better, than any college coach. Hard work equals playing time was his golden rule. Lawrence coached many students that later went on to be very successful college and professional players. Several of his students went on to become some of the best coaches in the NFL. A fellow track coach at A&M Consolidated Junior High School remembered this about Lawrence “the kids loved him and were scared to death of him, but later grew to love his caring and strict disciplinary ways”.

Lawrence was a member of St. Thomas Aquinas Church where he started a group of seniors to serve as ushers and altar servers for funeral masses during the week. He joined the Knights of Columbus in 1955, and served as Grand Knight of Council 3205 in College Station, and as a district deputy for the Texas State Council. Lawrence was a charter member of the Msgr. Valenta Assembly 2041 in College Station where he served as the charter faithful navigator. From 1986-1995 he served as commander of the Assembly’s award winning drill team. That team placed first in district and state competitions for much of the 1980’s and 90’s. He served as commander of 4th Degree Honor Guard until his death on Jan 21, 2011.

Lawrence is survived by his wife Dorothy of 50 years; two daughters, Karen Westbrook and husband JP, Johanna Schneider and husband Mike; and two grandchildren, Casie & Cody Westbrook. Lawrence was truly a Knight that loved his family, friends, and life itself. He truly believed in Charity, Unity, Fraternity, and Patriotism.