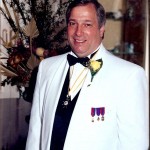 Ron Gay was State Deputy from 1998 to 2000, and led Texas to some impressive gains in membership. He led a team of dedicated knights statewide in recruiting more than 8,000 new members while starting thirty-six new councils. Under his leadership Texas had more than 300 Star Councils and more than 80 Star Districts. In fraternal year 1998-99 Texas set a Supreme Council record with 150 Star Councils. He was also named to the Supreme Knight’s Circle of Honor on two occasions. At the Supreme Council Meeting in Boston in August 2000, he was elected to the Supreme Board of Directors. Ron served three terms on the Supreme Board of Directors from 2000-2009.

Ron Gay has a sales and marketing career in health and retirement benefits that spans more than thirty-two years. He has both a bachelor and masters degree in Political Science from Sam Houston State University in Huntsville, Texas. Ron is married to Terri Mathis (09/17/1977), and they have three children. They also have five grandchildren.

Ron is very active in his local community. He is a former member of the College Station City Council and he is a Past Chairman of the Board for the Bryan/College Station Chamber of Commerce. He is Chairman-Emeritus for the Board of Directors for Hospice Brazos Valley. He is a thirty year member of the College
Station Noon Lions, and a Past District Governor for Lions International. Ron is also the Past District Chairman for the Arrow Moon District of the Boy Scouts of America and an Eagle Scout.