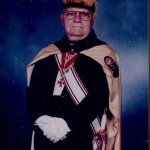 Col. Walter H. Parsons, Jr. is one of the charter members of Council 3205 founded February 20, 1949 at the Texas Agricultural and Mechanical College (later Texas A&M University) in College Station, Texas. Col. Parsons was born June 8, 1907. He graduated from Texas A&M College in 1930 and went to work for the Humble Oil Company in Ingleside, TX. In 1932 he married the former Abbie Dausey. Walter and Abbie were married for 53 years until Abbie’s death in 1985; and they were the proud parents of six children, five boys and one girl. 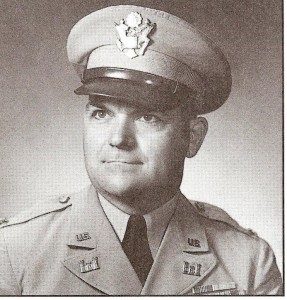 Walter H. Parsons entered active military service in the United States Army Corps of Engineers in April 1941 and served our country with distinction until 1962. One of his major accomplishments during his military career was to construct the Alaska Highway, a 1,400 mile highway connecting Alaska with the contiguous United States. Col. Parsons was assigned to the Military Science Department at the Texas A&M College from 1948-1951. In 1949 he was elected the Charter Grand Knight of Council 3205 then forming in College Station.

In 1962 Col. Parsons retired from the United States Army and moved back to College Station where he served as the Director of the Physical Plant for Texas A&M University from 1962 to 1972. Col. Parsons was instrumental in starting the first Squires Circle for Council 3205 in addition to serving as Grand Knight during the Council’s Silver Anniversary year of 1973-74. Col. Walter H. Parsons is Former District Deputy and a Former District Master for the 4th Degree. 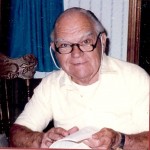