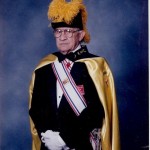 Bob Boller joined the Knights of Columbus in 1960, and he transferred his membership to the Col. Walter Parsons Council 3205 in College Station in 1964. He was Grand Knight of Council 3205 in 1966 and he was the Financial Secretary for the Council from 1967 to 1972. Bob joined the Fourth Degree in 1982. He was Faithful Navigator for the Bryan Assembly for two terms, and he was a charter member of the Msgr. Timothy Valenta Assembly 2041 in College Station.

Bob served the Texas State Council as District Deputy from 1988-1993. He won the Star District Award on two occasions for extraordinary membership and insurance development in his district. During his terms as District Deputy three new Knights of Columbus Councils were formed in the Brazos Valley; Council 10309 in Somerville, TX, Council 10555 in Hearne, TX, and Council 10624 at Texas A&M University. Bob was elected District Master for Texas District 6, Our Lady of Guadalupe Province in 1991.