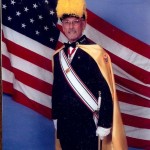 Joseph N. “Joe” LaBarbera was born in Marlin, Texas on July 17, 1942. He attended Marlin public schools until graduating in 1960. Joe earned a Bachelor of Science degree in Agronomy from Texas A&M University in 1965. He subsequently joined the United States Army and served as an artillery instructor at Ft. Sill, Oklahoma until 1969. He would stay in the Army National Guard Reserves until 1972.

Joe married his wife Patricia on January 9, 1966, and together they would raise four daughters. He started his career as a soil scientist with the United States Department of Agriculture, Soil conservation Service in Mt. Pleasant, Texas in 1966. His career with the Department of Agriculture would span 39 years with stops in Mexia, Longview and Bryan, Texas. In 2005 Joe retired from the USDA.

Joe has always been an active member of the Church and his local community. He has served his parish in Longview as a religious education instructor, Festival Chairman and Building Fund Chair. He and is family joined the parish community of St. Thomas Aquinas in College Station in 1990. Joe has served St. Thomas Aquinas on the Pastoral Council, and as an adult leader for the parish youth program.

Joe joined the Knights of Columbus on New Year’s Day 1960. He served in a variety of offices for his council in Longview. In 1986 Joe became a member of the Fourth Degree. He later served as Faithful Navigator of his assembly in Longview in 1989. Joe transferred to the Col. Walter Parsons Council 205 and to the Msgr. Valenta Assembly 2041 in 1990. Joe was elected Master of Texas District 6 in 2004. He served in that position until 2008.

Joe served his local community as a member of the Jaycees. He was Vice President of the Texas Jaycees from 1975-77. He Chaired the Gregg County Fair Board, and the Gregg County Fair & Rodeo association. Joe was named the Outstanding Citizen of the Year by the Mayor of Longview in 1990. He was also a member of the Longview Chamber of Commerce and Chairman of their Agriculture Committee. Joe was a member of the Wellborn Lions Club, and President of the Board of Directors for Junction 505 a not-for-profit group that assists physically and mentally challenged adults with job training and placement.