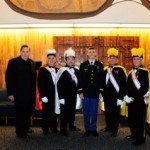 The Knights of Columbus, Msgr. Timothy J. Valenta Assembly
#2041 of College Station, Hearne, and Franklin, Texas utilized
a major opportunity to show its gratitude towards the Texas A&M ROTC Units in the Corps of Cadets for the commissioning Army Spring class of 2010 on Friday, May 14.

The Assembly #2041 bestowed the newly created “ST. Michael the Archangel Award” on Army Cadet Klinton J. Paveglio of San Antonio, Texas, commissioned as a 2nd LT Infantry for his US Army regular status.  A board consisting of the acting Commandant and professors of the military science chose Cadet Paveglio for the Army, Navy/Marines, and Air Force. 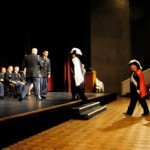 This annual five hundred ($500) scholarship will be presented
to a Catholic Cadet who ranks highest in the evaluation process for all graduating ROTC Corps seniors each spring. The award will rotate among the various branches of U.S. Arm Forces. The award is for the newly commissioned officer to help purchase a full dress uniform.  Our Assembly #2041 fulfilled its patriotic commitment to a selected Catholic group of ROTC graduates who will defend with pride our national policies both foreign and domestic.

This entry was posted in Knights News. Bookmark the permalink.